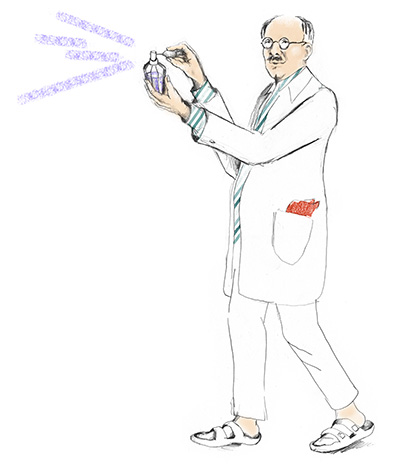 “for his work on polymethylenes and higher terpenes”

Of Perfumes and Partisans

Leopold Ruzicka’s research on odorous substances and sex hormones revealed chemical compounds that scientists did not believe could exist.

Leopold Ruzicka’s scholarly energies were devoted to natural odors and hormones. Originally from Croatia, Ruzicka investigated polymethylenes and terpenes, the chemical names for odorous substances produced by plants and animals. In his research, Ruzicka was able to identify the chemical structures of moscine and civetone, odors from the skin glands of musk deer and civet cats. Moreover, he succeeded in synthetically producing these substances in the lab, which piqued the interest of the Swiss perfume industry.

Ruzicka’s insights from the laboratory were nothing short of a scientific sensation: In his research on fragrances, he identified carbon compounds with rings of up to 17 members. Up to then, experts had questioned the existence of such large carbon rings.

At the start of his career, Leopold Ruzicka taught and researched simultaneously at ETH and the University of Zurich. In 1918 – the year in which he also became a Swiss citizen – he qualified as a Privatdozent at ETH, and, in1920, at the University, where he lectured until 1925. In 1929, he became the first Swiss citizen to be appointed to the chair for general chemistry at ETH.

Ruzicka was not only “Lord of the Carbon Rings”; in the 1930s, he was also at the forefront of hormone research. He succeeded in defining the structure of the male sex hormones androsterone and testosterone, and was able to synthesize these important messenger substances in the laboratory. In 1939, just after the outbreak of World War II, Leopold Ruzicka was awarded the Nobel Prize for Chemistry in recognition of his work.